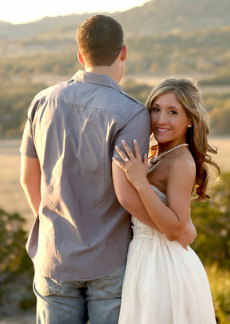 Billy and I met in San Marcos while attending Texas State University in May of 2008.  One day while I was working at Sunglass Hut, Billy came in to apply for a job and I thought he was a cutie:) When he returned for his first day at work he was deliberately not showing me any attention, almost to the point of being mean! That made me annoyed and intrigued at the same time. haha. After working with him a few times, I found myself always thinking about him and told my roommate, Kellie that there was a guy at work whom I had a crush on. <3 We started dating that summer and became inseparable! Over the years we have grown together, and he has made me a better person. Being with Billy feels so natural and effortless. Five years later, he’s still the one I love! 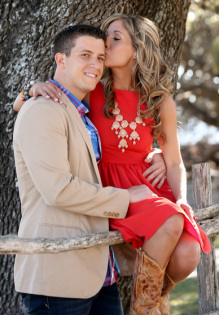 We met in the beginning of summer in 2008. I was attending Texas State University and needed a job so I applied at a sunglass place. I asked the cute girl standing behind the register for an application, completely oblivious to the journey we were about to take, I filled one out. I started working there and finally got a chance to work with her. That day I acted stand offish pretending like I wasn't interested in her and she started asking me questions about where I'm from and what my interests were. I played it cool and after that we started dating. That summer turned out to be one of the most memorable moments of my life. That summer was the beginning of a new chapter and every day with Ashley has been a blessing. I look back at the moments of that summer and thank God that I met her. She is my life.